Following on from the updates for Savings Jar and Word Count Dashboard, Plotline has been through the same stern talking-to, and now sports a new iOS 8 style look and feel, as well as new icon. It's the same app behind the scenes. 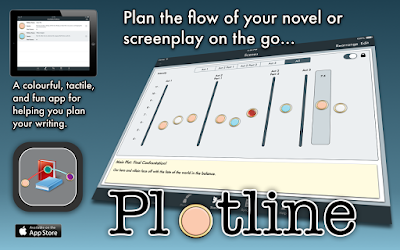 The updated version should be filtering through the App Stores from about 10am UK time.

As an aside, all our apps are now available on the New Zealand Mac and iOS App Stores.

Thank you to everyone who has given Plotline a try - I use it all the time, and I hope you're all enjoying it too.

Savings Jar for iPad updated, and happy birthday to Peace of Mind

The iPad version of Savings Jar has been off to the same spa as Word Count Dashboard for a makeover, and now has a clean, iOS 8 look and feel. 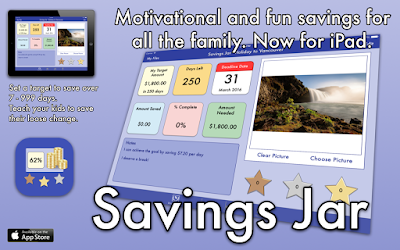 It's the same app as before, and is a free update to anyone who's already purchased the app.
I've also added a Help tab to the app, which includes some documentation about how to use the app.

Anyway, I hope you enjoy the new version, I really like the new look.

It's also the second anniversary of Peace of Mind, which is available for Mac. It's one of those apps that you never knew you needed, but will make things easier down the line. It keeps details of your "arrangements" together, in a way that your loved ones would find useful if you were gone, and they had to deal with your affairs/estate.

It doesn't hold any passwords or account details, just "where to look for everything", and what things you've set up (such as standing orders, which insurer you're with for house insurance, etc.)

It's not a "cool" app that you'll use every day - but it's one that will save a lot of time and effort one day.
Posted by Craig Romans at 06:57